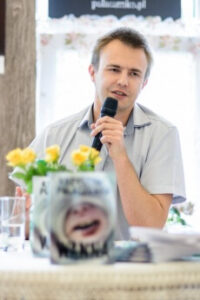 Krzysztof Polaczenko is an artist born at 15th of January 1987 in Świdnica, Poland. He graduated the School of Advertisement Execution in 2008. He has been painting for most of his life and finally decided to become a professional painter.

In his works he combines different techniques such as an acrylic paint, oil paint and aquarelle coloured pencils, oil pastels and ball point pens. His inspirations are derived from an observation of our world.  He is obssesed about details, quality and durability of paintings. His works are in polish and foreign collections.

Beyond being a painter he is also a writer and a multi-instrumentalist musician. As a musician he created five albums and released them by net labels. His music was downloaded more than 60000 times. In 2014 as a writer he published a touching novel called “Wanna” (in english “Bathtub”).